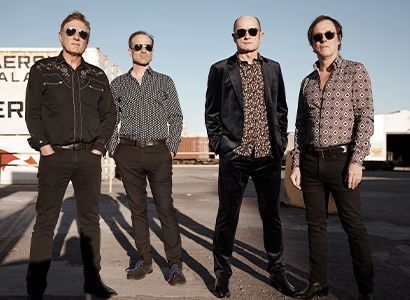 There is a ticket limit of 4 GA OR 6 RESERVED for this show.

Orders exceeding published limits are a violation of our ticketing policy and may result in order cancellations without notice and/or the prohibition of future purchases.   Multiple accounts (per household, address, credit card, email address), purchases, or ticket types may not be used to exceed these limits.

Hoodoo Gurus (sometimes just shortened to 'Gurus') are an Australian rock band combining elements of seventies power pop, bubblegum pop, Beatle-esque harmonies, psychedelia and grungy garage rock. Guitarists Dave Faulkner, Rod Radalj, and Kimble Rendall were joined by drummer James Baker when the band formed in Sydney in 1981. Baker and Radalj had been members of Perth band The Scientists in 1977-79, while Baker had drummed with Faulkner and in another Perth band, The Victims, in 1978-79.

The original lineup was notable for having three guitars and no bass player, creating a distinctive, layered sound. Kimble Rendall left in 1982 before the release of their first single, Leilani, and went on to become a noted music video director. He was effectively replaced by bassist Clyde Bramley. Radalj was not happy with Rendall's departure or Faulkner's increasing influence, and left the band himself, to be replaced by one-time Fun Things guitarist Brad Shepherd. This line-up released the band's break-through first album, Stoneage Romeos, in 1984.